Music, party and good mood – one million people protest at the CSD in Berlin for equal rights and the right to self-determination

Christopher Street Day, the world’s best-known LGBTI* event, takes place every year at the end of July in Berlin. Also in 2019, on 27 July, up to one million participants are expected to cheer the colourfully decorated car as it moves through the city centre. With an annually changing motto, they call for an end to discrimination and exclusion. From Kurfürstendamm, the journey continues to Brandenburger Tor, where the grand final rally will take place.

When Christopher Street Day took place for the first time in Berlin in 1979, around 450 participants were counted. Today, four decades later, up to one million people gather every year in the center of Berlin to demonstrate for equality and self-determination. This makes the CSD in Berlin the largest event of the LGBTI* community in Germany. Every year, numerous colorfully decorated floats full of exuberant celebrating people move through Berlin’s city center. The parade, which runs from Kurfürstendamm to the Brandenburg Gate, is flanked by a cheering crowd. Local and enthusiastic visitors from all over the world are present when gays, lesbians, transsexuals and transgender, inter- and bisexuals take to the streets for equal rights. The CSD is a reminder of the arbitrariness with which the New York police took action against homosexuals on Christopher Street in Greenwich on June 27, 1969. Days of riots, in which sexual minorities demanded an end to discrimination, were the result and laid the foundation stone for the worldwide CSD demonstrations.

Highlights of the CSD in Berlin

celebrate, dance and enjoy the exuberant atmosphere at Germany’s biggest CSD parade in Berlin
a community celebration for all: people of all ages, from all parts of the world and with different sexual orientations celebrate together
large parade through the city centre of Berlin with more than one million enthusiastic participants from all over the world
starting in the afternoon, big finale and closing rally at the Brandenburg Gate with special live acts on the main stage
numerous party locations all over Berlin invite you to celebrate the whole night
Our tips for your visit to the CSD

The CSD in Berlin takes place every year on a Saturday at the end of July. The big parade is usually opened at 12:00 noon. From the starting point south of the city centre, the wagons then travel east through the Tiergarten Park. Via the Straße des 17. Juni the big finale will take place at the Brandenburg Gate, where the main stage is located. A varied programme with many live acts and a party atmosphere awaits you there until midnight. There is also something for children. We recommend that you inform yourself in advance about the exact route and then travel by public transport. There are road closures around the parade, but all areas are within walking distance. You can either position yourself at one point and look at the passing cars, or you can follow the train through the city centre. Along the route there are many stalls selling food and drinks. There are also many bars and restaurants with music and street sales. At midnight the programme ends at the Brandenburg Gate, after which numerous clubs throughout the city invite you to dance.

Everyone is welcome at the CSD in Berlin; the parade and the entire accompanying programme are free of charge for everyone. 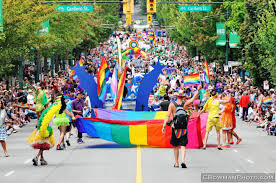 Lets give a gift to random nurses and frontline workers at all Calgary Hospitals.